Documenting the failure of public health policies in dealing with the onslaught of chemical, biological, and radiological agents that are waging a war of attrition against humanity.

The Bio-tech industry looks to be determined to force GM foods into the global food chain. Are we on the brink of implementing irreversible modification of Human DNA?

Dr Leonard G. Horowitz, has been at the forefront of health consciousness and human rights for nearly 30 years. He is famous worldwide for indicting the Anglo-American Military – Medical – Petrochemical – Pharmaceutical cartel for omnicide (i.e. killing everything) and exposing governors and governments for malfeasance, misdirection, and suppression of natural curative medicine and science.

Filmed at The Alternative View 2 Event in London – May 2009 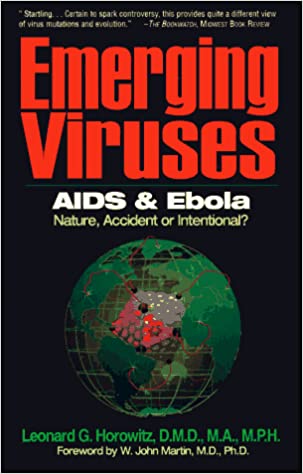 Claims that “emerging viruses,” AIDS, Ebola, herpes viruses, HPV, hepatitis A, B, and C, Epstein Barr, and the new flu viruses “naturally evolved” and then jumped species to infect humanity seem grossly unfounded in light of the compelling evidence assembled in this monumental text.

Alternatively, the evidence is irrefutable that these bizarre germs were laboratory creations, accidentally or intentionally transmitted via tainted hepatitis and smallpox vaccines in the U.S. and Africa – as numerous authorities have alleged, but no one like Dr. Horowitz has been able to prove. This text presents several “smoking guns.”

Emerging Viruses by Horowitz reviews numerous viral vaccine studies conducted in New York City and Central West Africa by a network of virologists working for major military/medical contractors under the auspices of the National Cancer Institute and the World Health Organization.